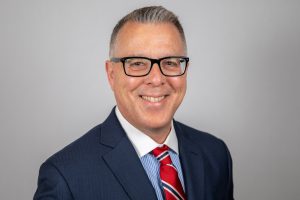 Mr. Fulton obtained his BA (Hons. 1984) from McMaster University, his LLB (1987) from the University of Western Ontario and was admitted to the Ontario Bar in 1989. He joined Linamar Corporation in 2003 and is currently Executive Vice President – Human Resources, General Counsel & Corporate Secretary. Prior to Linamar, he worked for one of Canada’s largest steel producers as General Manager of Human Resources and Legal Affairs. He has extensive experience in the areas of corporate commercial law, mergers and acquisitions, project construction, financing, regulatory offences, labour & employment, securities and litigation management. Mr. Fulton sits on several subsidiary boards and acts as corporate secretary. He has been a presenter and panel member at the Canadian Corporate Counsel Annual Institute and American Corporate Counsel Association conferences.

Mr. Fulton has been active within the St. Joseph’s System since 1996, serving in various capacities including, as Chair of St. Joseph’s Homecare, member of the Board for St. Joseph’s Healthcare System, and on the System Governance, Finance and Audit, and Philanthropy Committees.