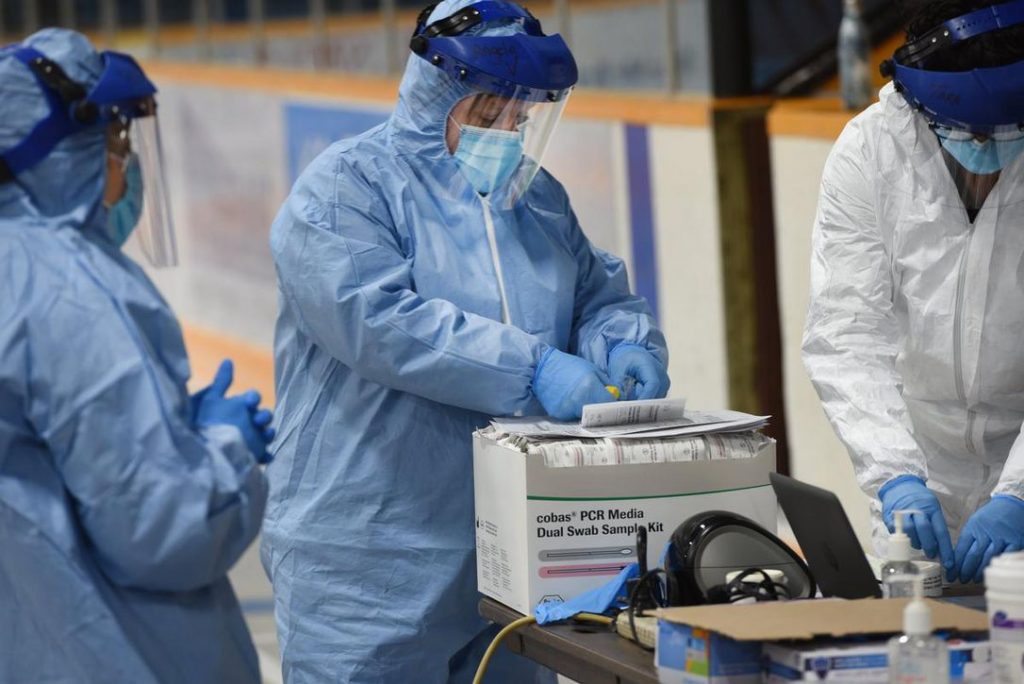 A new pilot project will see some 3,000 asymptomatic residents and staff at Hamilton and area care settings tested for COVID-19.

On Monday, St. Joseph’s Health System and Niagara Health announced a pilot project is underway to test all asymptomatic patients, residents and some staff in its long-term care homes, retirement homes and congregate settings, such as hospices.

The goal is to gain a better understanding of how the virus spreads, how can spread be prevented and what testing strategies are most effective when the subjects are concentrated in one place, said Dr. Jack Gauldie, vice-president of research at St. Joseph’s Healthcare Hamilton.

The announcement comes a week after the province said more people in long-term care settings would be tested for the virus. Testing of all asymptomatic staff and residents at “select homes” would take place, said Minister of Long-Term Care Merrilee Fullerton.

Dr. Tom Stewart, CEO of St. Joseph’s Health System, said those involved with the pilot project wanted to be ahead of the curve.

“Let’s get an understanding of are there patients in there that are asymptomatic that could be the cause of a future outbreak?” Stewart said. “Let’s collect more information.”

According to a release, 111 long-term care residents have so far been tested for COVID-19 “whether they had symptoms or not” as part of the pilot. All tests were negative. Staff have the option of being tested.

All 3,000 tests are expected to be carried out this week, Stewart said.

Harvey said mass testing gives public health “a much better idea of what efforts are needed and what strategies are needed to curb any further transmission.”

As of Monday, 16 people in Hamilton have died from COVID. All but four were residents of one of two long-term care homes — Heritage Green and Cardinal — or Emmanuel House Hospice.

Gauldie said once the project is complete, experts will analyze data, looking at how to minimize glitches, maximize efficiency and improve accuracy.

“We need to see how to do it correctly,” he said.

Katrina Clarke is a Hamilton-based reporter at The Spectator. Reach her via email: katrinaclarke@thespec.com

A brilliant scientist and a world-class athlete, Jack Gauldie could have taken his career to any locale around the globe. The renowned scientist chose to maintain his address in the city where he was raised, Hamilton, while the influence of his life’s work spanned the world.

St. Joseph’s Healthcare Hamilton Vice President (Research) and Delta Secondary School graduate has earned the country’s highest honour as a Member of the Order of Canada, which recognizes outstanding achievement, dedication to a community, and service to our nation.

The well-deserved recognition stems from achievements that have occurred over more than four decades pursuing two diverse passions, both resulting in Jack representing Canada on the world stage. Some have called Dr. Gauldie one of the founding fathers of the field of cytokine biology. Cytokines are molecules that cells use to signal to each other. Indeed, one of Jack’s most significant contributions to health sciences was his discovery of Interleukin 6 (IL-6) and this cytokine’s role in understanding, at the molecular level, how people respond to infections, autoimmune diseases and chronic conditions, including cancer. His work with IL-6 evolved out of the most formative years of the newly discovered area of cytokine biology. Currently, drugs targeting IL-6 are being used in arthritis treatment.

In the mid-80s, Jack turned his attention to pulmonary fibrosis. His lab established that cytokines of the TGF-b family were major factors involved in the fibrotic process – the formation of scar tissue – in the lungs. The advancements spurred further interest and investigation of pulmonary fibrosis over the past 30 years, which led to the development of two new drug therapies for a lethal pulmonary disease.

Later, Jack began a close collaboration with Dr. Frank Graham at McMaster, a pioneer in the use of adenovirus as a vector for foreign genes. Jack worked with this vector system to deliver antigen genes to dendritic cells for cancer vaccine development. His work has helped the development of currently successful approaches to stimulate the human immune response to control cancer progression, and effect significant cancer regression.

After graduating from Delta Secondary School in Hamilton’s east end, Jack attended McMaster University to complete an undergraduate degree in chemistry and physics.  His professors encouraged him to continue his graduate studies at University College London, England where he received his PhD in Biological Chemistry. He then returned to Hamilton to join the faculty at McMaster University’s Michael G. DeGroote School of Medicine, where he holds the highest honour of Distinguished University Professor.

Dr. Jack Gauldie’s impressive achievements in medical research are made even more outstanding by the fact that his second passion led him to represent Canada in water polo at the Pan American Games in 1967, and again at the Munich Olympic Games in 1972.

“Prominent among Jack’s many qualities are his strong sense of commitment and loyalty. Jack is a staunch Hamiltonian dedicated to the promotion of the city, its university and this hospital,” said Dr. Stephen Collins, Distinguished Professor, Michael G. DeGroote School of Medicine. “As an internationally recognized scientist he has brought much recognition to our academic community. As an Olympic athlete, he served his country well. Few are more deserving of this recognition.”

Today, Dr. Gauldie is Vice President of Research at St. Joseph’s Healthcare Hamilton, and Scientific Director of its Research Institute. St. Joe’s is a McMaster University affiliated research hospital. In this role, Jack is a champion for healthcare research that is transforming clinical, translational, evaluative and fundamental research across the spectrum of mental health, kidney, genitourinary, and respiratory care. This work is also putting his beloved city of Hamilton on the map as a magnet for top medical researchers around the globe.

In praise of Jack Gauldie –

“Jack Gauldie’s induction into the Order of Canada reflects his multiple local, national and internationally acclaimed achievements.  A former Canadian Olympic waterpolo athlete, he is globally recognized for his outstanding research in immunology, cancer and fibrosis, led McMaster’s Department of Pathology and Molecular Medicine to its current preeminence and now champions and leads health research at St Joseph’s Healthcare in Hamilton.”

“Upon hearing that Dr. Jack Gauldie was awarded the Order of Canada, two thoughts immediately came to mind. Fantastic!….but, what took so long! The Order of Canada recognizes Canadians for their contributions to culture or communication. Others for their significant contributions to sports or the arts. Still others for their contributions to science and the betterment of humanity. Jack Gauldie is all of the above. After representing Canada in the Olympics, he became a coach/manager and later an Olympic commentator on CBC. He took a bit of time off from these activities to become a world renowned scientist developing new treatments for cancer, and training the next several generations of Canadian scientists and physicians. Beyond all of these international accomplishments, those who know Jack best appreciate he is a wonderful person full of joy, kindness, laughter, and just the right amount of impish mischief to make us all smile.”