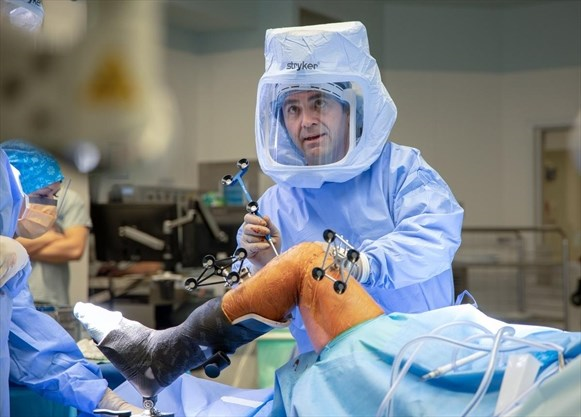 HAMILTON—Think virtual reality and you might picture a fantasy world to be explored and enjoyed. But researchers and staff at a Hamilton hospital are using the technology to better understand what it feels like to be in a seclusion room, the health-care equivalent of a jail segregation cell.

“We wanted to see what it was like to be on the other side of the door,” said Gary Chaimowitz, head of the forensic psychiatry program at St. Joseph’s Healthcare and a professor at McMaster University. “I think many of us can imagine, or recall times when you’ve been in places by yourself, when you didn’t want to be by yourself, left alone, but this puts you, as a staff person, in our rooms.”

Using a VR headset and hand controllers, staff are transported into a room modelled after real seclusion rooms at the hospital, and another set in a jail cell.

SimWave, an Ottawa-based company, used photographs to recreate the experience.

In two of three VR training modules being used at the program, you try to get the attention of virtual staff on the other side of the door. The seclusion room has no bathroom, and your bladder is full. You can ask for help, pace the room and knock or even pound on the door.

Your call for help returns one of 10 programmed responses, ranging from, a polite, “Yes, we’ll get you something,” to “Hold on a sec, we’re a little bit busy right now,” to a little more pointed response, Chaimowitz said.

“The tone, if you’re on the receiving end of that, obviously it makes a hell of a big difference,” he said.

Sometimes, there is no response, or the “patient” hears laughter. In another scenario, you actually get to use the bathroom.

“We’re looking at how long you can be in there before you get anxious,” Chaimowitz said, “and what it’s like to have a different staff response, the idea being that we are going to try to sensitize staff to what it’s like to be on the inside, which might change the way they interact with patients, both in terms of their tone and also a recognition of what it’s like to be there.”

Some staff have had to remove the headset after a while because they feel so enclosed by being in the room, Chaimowitz said, adding no one has found the experience to feel fake. “People have acknowledged that this is very different than being on the other side of the door,” he said.

The artists and developers at SimWave paid close attention to the finest of details. “If you press your virtual nose against the walls you can really see the details,” said Matt Thomas, SimWave’s head of business development.

Many of the hospital’s patients come from jails and return after treatment. Chaimowitz said the hospital hopes to share this training experience with provincial and federal corrections systems, where the use of segregation is under intense scrutiny.

In federal and provincial jails, inmates are being held in segregation for great lengths of time, and often exceeding 15 consecutive days, a point beyond which the United Nations has called to be banned because of the proven psychological harm it can cause.

This fall, as part of a human rights case settlement, Ontario’s Ministry of Community Safety and Correctional Services released two months’ worth of data on inmates either awaiting trial or serving short sentences who had spent time in segregation.

Of 3,998 placements in segregation, 778 were for periods longer than 15 consecutive days, the data revealed.

Half of the inmates had mental health alerts on their files and more than a third had a suicide alert.

“The correctional system is behind,” says Chaimowitz, who gave expert testimony at the coroner’s inquest into the 2007 death of Ashley Smith, who spent more than three years in segregation.

He recalls his first visit, decades ago, to a Hamilton jail. “I could hear people screaming and recognized there were mentally unwell people.”

“I don’t think anybody there is being cruel,” he said. “But it is frightening, and it is one of those sort of things that I can’t believe, in our cities, that we house people like this.”

The VR training can’t replicate everything in a seclusion or segregation setting, such as the degree of noise, the clanging and the smells, but the idea is that “if we can walk in someone’s shoes, even if it’s the way you deal with people, that it will be a little bit more humane,” he said.

Another training module simulates a search for contraband in a psychiatry patient room complete with a full bathroom. A more complex simulation still in the works involves an educational night-shift scenario that begins with hearing a noise and escalates into a hostage-taking situation.

The hospital’s forensic psychiatry unit has 114 beds and will be adding four correctional beds, as part of a pilot project with the provincial ministry that overseas corrections. Those beds should cut down visits by mentally ill inmates to hospital emergency rooms, where staff are “uncomfortable” with corrections patients who are shackled and handcuffed, Chaimowitz said.

“We’ll be in a better position to treat them and get their mental illness under control,” Chaimowitz said. “The idea is to bring them in here and get them well enough” to return to the general jail population, he says. “I think it the potential for making a big difference is very, very high.”

As for more the potential for virtual reality, Chaimowitz and his team would like to see patients given the opportunity to use the technology to escape their rooms and units and explore.

“They are basically stuck in their unit and the perimeter around St. Joe’s and Hamilton. So, they can’t do a lot,” said psychiatrist Sébastien Prat. “We want to develop that kind of project, in order to make them able to travel to a beach or somewhere they want to go, so they can enjoy something.”