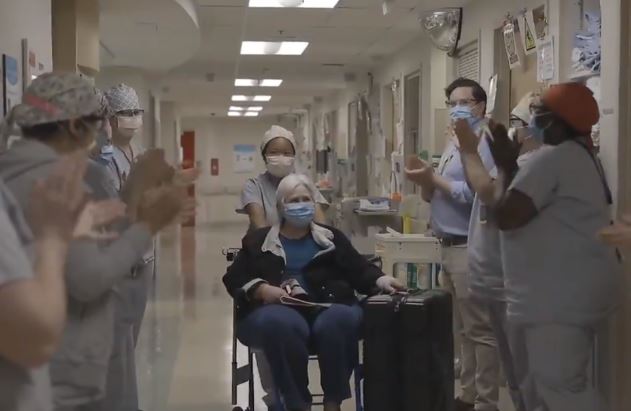 That’s what it took for Helen Keene to see the light of day beyond the COVID-19 unit of St. Joseph’s Hospital.

On Wednesday, she was finally discharged to fanfare.

Lining the hall, nurses, doctors, cleaners and other hospital staff clapped as registered nurse Tanirose Guiao pushed the 71-year-old’s wheelchair out the doors.

“My heart exploded,” said Keene. “I was so overwhelmed with the kindness and generosity. That was a gift.”

Keene was admitted to hospital in early April when she became one of the first residents infected with the respiratory virus at Cardinal Retirement Residence.

The Herkimer Street institution has been home to one of the worst outbreaks of the virus in Hamilton. There were 65 cases — 47 residents and 18 staff — before the outbreak was declared over May 3.

When Keene first came down with the virus, she was having trouble breathing, she had a fever and her white blood cell count had dipped.

Due to her medical history, which includes open heart surgery and stent, Keene was put on a heart monitor. She also developed a “horrendous” cough.

“It was so bad my rib cage was bruised and sore,” she said. “I couldn’t even touch my chest, I was in so much pain. It hurt to breathe.”

But, Keene still counts her lucky stars that she never ended up on a ventilator — a story she became far too familiar with hearing in the hospital.

“I was one of the blessed ones,” she said. “I was thankful for that every day.”

Having been under close watch by staff, Keene said she now considers those who cared for her to be her “extended family.” Guiao, a 23-year-old nurse from Burlington, was with her through the entire journey.

The pair got to know one another between waves at the windows and chats while Guiao was checking in on her. Guiao knew Keene was grieving the loss of her husband, Michael, who died two years ago and that the song “I’ll See You Again” by Westlife kept her grounded.

Last week, following a negative result, Keene tested positive again. Lying in bed, feeling depressed and missing Michael, Keene suddenly heard the tune over the intercom, dedicated to her by the team.

“It made the … stay possible to tolerate,” she said. “It was unbelievable what they did for me.”

But on Wednesday, that news shifted.

Guiao was able to deliver Keene the results she had been waiting for — she had tested negative for the second time in 24 hours and she was going home.

“We were screaming and yelling and we high-fived each other,” said Guiao. “It was such a joy.”

Even if it had been positive once again, Keene’s resilience in the hospital was “inspiring,” she added.

“(Helen) never gave up and she always had a positive attitude,” said Guiao. “It was a pleasure caring for her … she’s a fighter.”

Having “conquered” the virus, Keene is hopeful that people will continue to follow physical-distancing measures, live day by day and avoid feeling resentful for the time they may miss with their loved ones.

In her own condition, Keene realizes she could have been one of the “unlucky ones.” As of Thursday, the virus had claimed the lives of 25 people in Hamilton.

Fallon Hewitt is a Hamilton-based reporter at The Spectator. Reach her via email: fhewitt@thespec.com