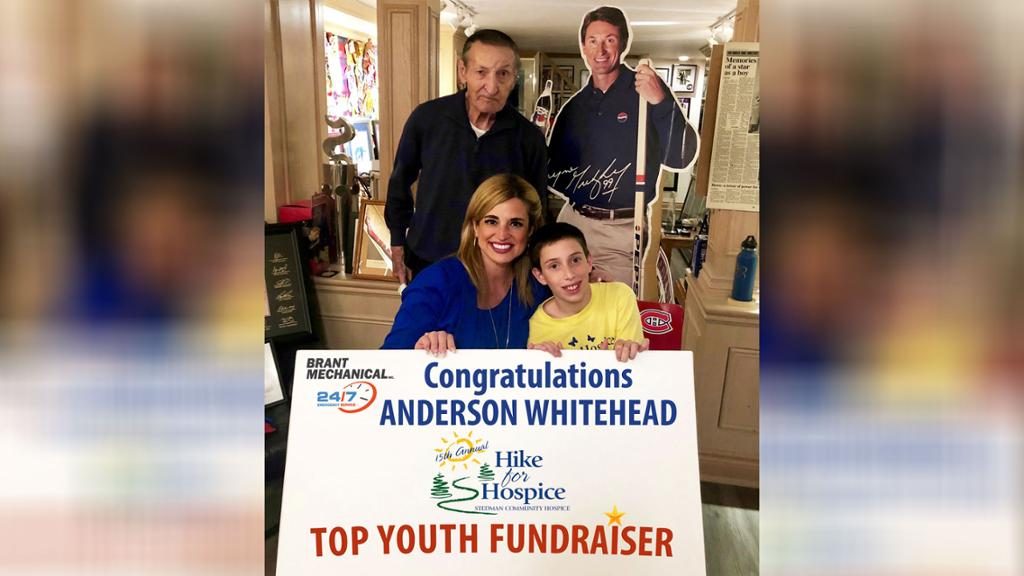 Anderson: From a hug with Price to fundraising with Mr. Gretzky

***UPDATE #2***Anderson is raising money to support the hospice that took care of his mother….it is a wonderful, caring facility and if you would like to sponsor him for the Stedman Community Hospice HIKE FOR HOSPICE here is the link:https://www.stedmanhike.ca/anderson-whiteheadAnd thank you to everyone for all your kind words ❤️❤️UPDATE** We want to say a huge THANK YOU and MERCI BEAUCOUP to everyone for all your very kind comments. Anderson is competely blown away that this post has gone viral and sooooooo happy with all the love he’s getting….thank you all!! I wanted to share this video of my nephew Anderson, meeting his idol, Carey Price of the Montreal Canadiens. Last year as Anderson’s mom was dying of cancer she promised she would do everything she could to make his dream come true. Unfortunately, she passed away before that could happen but through some very kind and generous friends we were able to arrange a visit to the morning skate. As you can see in the video, Carey Price was a class act not only giving Anderson two signed sticks, a signed puck, signing his jersey and mini stick but he also gave him the biggest hug. Words cannot describe how much this meant to Anderson and we are forever grateful to this wonderful man.

MONTREAL – Not many people can boast about getting the world’s most comforting hug from Carey Priceas well as a guided tour of the childhood home of none other than Wayne Gretzky.

And yet that’s exactly the case for Anderson Whitehead.

Anderson, just 11 years old, tugged at the heartstrings of more than a few people in February with this viral video.

In case you missed it, Anderson’s mom, Laura McKay, passed away on November 7 following a long battle with cancer. Laura’s final wish was to help her son meet his idol, Carey Price.

His wish finally came true in February at Toronto’s Scotiabank Arena. The magical encounter is in the running in the NHL Fan Choice Awards for Best Feel-Good Moment of the 2018-19 season.

After getting the chance to meet his hero, Anderson chose to show his support by devoting his time and energy to fundraising for the palliative care center that took care of his mother, the Stedman Community Hospice in Brantford, ON.

Anderson participated in the center’s Hike For Hospice on May 5 and won the prize for top youth fundraiser after pulling in $5,800. That total was also good for second overall for the event, which raised over $340,000 for the hospice.

As a matter of fact, a man by the name of Walter Gretzky happened to be the honorary president of the Hike. Anderson got the chance to visit Mr. Gretzky’s legendary home in Brantford, the home in which Wayne Gretzky spent the majority of his childhood.

Anderson was able to have a look at some of the unique items in Mr. Gretzky’s collection and chat about them with No. 99’s dad.

The video of Anderson with Price was also shown to Mr. Gretzky, and it left him stunned.

“Wow! That’s wonderful. Anderson is God’s angel. He is a caring Canadian. I am very proud of him, and it takes a lot to impress me,” he quipped.

Wayne’s father also had nice words for the giver of the hug, Price.

“Well how about that! That was really nice of Price to do,” added Mr. Gretzky. “These players don’t even realize the wonderful effect they can have on people. That was so kind of him. What a good guy!”

Anderson echoed the elder Gretzky’s sentiment, not really able to find words powerful enough to describe all the respect and admiration he has for the Habs’ All-World netminder.

“To say that Price is the best goalie in the league would be an understatement,” added Whitehead. “By far, he is the best in the whole world in terms of skill level, and his generosity rises his stock level to be number-one.”

While visiting Mr. Gretzky and his collection, one item stood out immediately to Anderson. It was two seats from the old Montreal Forum that had been signed by none other than Jean Beliveau and Yvan Cournoyer. Naturally, it was there that Anderson chose to take a photo with Walter and Olga Consorti, president and CEO of St. Joseph’s Lifecare Foundation, which fundraises on behalf of the hospice.

He also had some advice for all the Canadiens, even though he admitted with a huge smile on his face: “Just to make it clear, I don’t even really know how to skate.” Anderson suggested they play a more conservative game, play hard, don’t get injured and keep their heads up.

More importantly, however, Anderson offered up some advice for other young people who are dealing with the loss of a loved one like he did.

“Advice I would give to other kids who have lost someone close to them is to think of the good times you had with them, don’t think of the bad times,” he shared. “Try and remember only good memories.”

Anderson turned his own adversity into a passion for helping others and he is now determined to do even more next year for a cause that’s close to his heart. He has already started raising money for next year’s Hike, set to take place on May 3, 2020. Anderson would like to at least double that $5,800 total from this year and is making it his mission to be the top fundraiser of the entire event next time.

To support Anderson in his efforts, fans can make a donation in memory of his mother, Laura McKay, using the secure website https://www.sjlc.ca/donations/donate and heading to the Tribute Gifts tab. Alternatively, donations can be made by phone at 519-751-7096, extension 2475, or by sending a cheque to the St. Joseph’s Lifecare Foundation at 99 Wayne Gretzky Parkway, Brantford, ON, N3S 6T6.

To vote for the video of Anderson’s meeting with Price for Best Feel-Good Moment in the NHL Fan Choice Awards, click here.