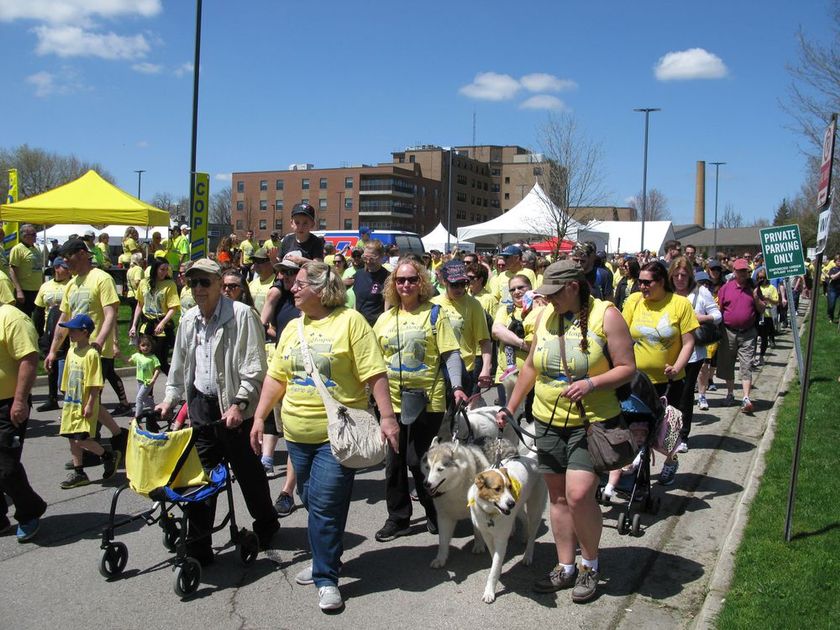 A massive “celebration of love” on Sunday raised just over $338,000 for the Stedman Community Hospice.

Perfect walking weather drew as many as 2,000 participants to the 15th annual Hike for Hospice.

“We have lots of angels watching out for us, from above and on the ground,” said Olga Consorti, president and CEO of St. Joseph’s Lifecare Foundation, as a sea of participants wearing bright yellow hike T-shirts began to fill the parking lot at the St. Joseph’s Lifecare Centre on one of the season’s first warm sunny days.

Many hikers were there for a loved one who spent their final days at the hospice, which provides end-of-life care to people and support for their families free of charge.

Led by the Brantford Pipes and Drums, walkers streamed onto the streets surrounding the hospice for a one-kilometre stroll.

The names of everyone who has died at the hospice since it opened in 2004 was listed on boards outside the hike registration tent and printed on the commemorative hike T-shirts.

More than 20 members of “Team Cindy” designed their own shirts with their connection to Cindy Haalstra printed on the back: wife, mother, sister, aunt, friend.

Haalstra was a pediatric nurse who was diagnosed with breast cancer in 2016 and died at Stedman Hospice on Dec. 21, 2017, after spending three weeks in care. She was 54.

“The staff was just incredible,” an emotional Jeff Haalstra, Cindy’s husband, said before Sunday’s walk. “We laughed and cried together.

“A group of women came in to sing Christmas carols. I will always have that memory of listening to Cindy singing along to Silent Night.”

Haalstra was the top fundraiser at the hike, bringing in $4,425, which won him a $4,000 travel gift certificate, which he promptly donated back to the hospice in honour of its staff and volunteers.

Hospices across Canada host a hike to raise awareness and funding in support of hospice care as part of the Canadian Hospice Palliative Care Association initiative. The local event is one of the top hikes in Canada for the number of participants and money raised.

Eleven-year-old Ella Whiting and her cousin Makenzie Robb, 12, used Sharpies to write “Grandma Shirley” on the backs of their hike T-shirts.

Shirley Robb was 69 when she died at the hospice about 18 months ago.

“It is the most amazing experience for someone at the end of their journey,” said Robb’s daughter, Jackie Whiting. “The care the family receives is just amazing. It allowed dad to take on the role of husband and not caregiver in her final days.”

Consorti said planning the Hike for Hospice is a “year-long love affair,” with the huge turnout “a credit to the amazing community we live in and how they value hospice care.” More than 100 volunteers help plan and run the hike.

“There’s something really special about the event,” said Consorti. “There is a beautiful energy.”

Janet Matteson said the care her stepfather, Andy Spain, received at Stedman Hospice in 2016 inspired her to become a personal support worker. She is now working at Emmanuel House, a hospice in Hamilton.

“I was blown away by how wonderful the care was,” she said on Sunday. “I wanted to pass that on to someone else.”

This year’s hike family was Jeremy and Jessica Stewart and their daughter, Vienna. Their daughter, Charlotte, who was born with a neurological degenerative disorder, celebrated her fifth birthday at the hospice, just two days before she died in September 2017. Soon after, they welcomed Lincoln “Charlie” to the family.

“Thank you everybody for being here and caring,” he told the crowd.

The second place prize of a travel certificate for $1,000 went to Cathy Chenier from “Ruth’s Troops” who raised $4,118.

Anderson Whitehead won the top youth prize of a $250 gift card by raising an impressive $5,800.