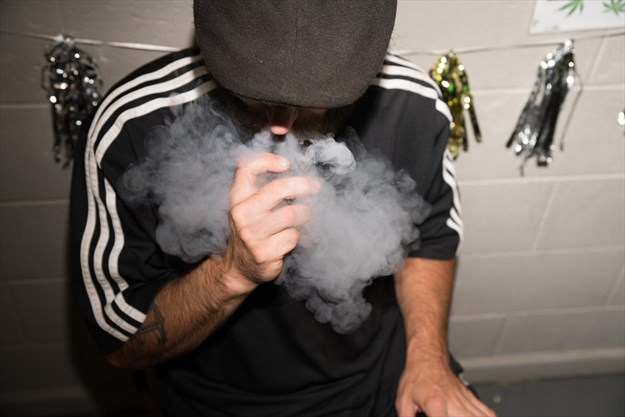 Snapchat, vaping and you: Youth anti-vaping campaign coming to Hamilton

A youth anti-vaping campaign, set to launch this fall, comes on the heels of a London, Ont. teen’s vape-related illness and vape-related deaths in the United States.

A vaping “de-normalization” campaign for youth is coming to a Snapchat filter near you.

The campaign, expected to launch across 15 public health regions including Hamilton in the fall, will target middle school and high school students, informing them about the risks of vaping in an effort to deter them from picking up the habit, said Janice Johnston, manager of the Tobacco Control Program with Hamilton Public Health.

“The only thing really that should be going into your lungs is air,” said Johnston. “Vaping does not come without harm.”

Spearheaded by the Southwest and Central West Tobacco Control Area Networks (TCANs), of which Hamilton Public Health is a part, the campaign will include anti-vaping ads on public transit, in schools and elsewhere, face-to-face promotion at schools and social media messaging, including special Snapchat filters that “de-normalize” vaping. The campaign is an expansion of the “Use Your Instincts” youth cannabis campaign developed by the City of Hamilton, which ran in December and January.

Vaping is the act of inhaling aerosol produced by vapour devices, such as e-cigarettes, which heat “e-juice.”

While the research is out on the long-term risks of vaping, 530 people in the United States have suffered illness linked to vaping (the number includes confirmed and probable cases). A Missouri man in his 40s who died Thursday was the eighth death linked to the illness.

And on Wednesday, a London, Ont., teen was diagnosed with a vaping-related severe respiratory illness, believed to be the first case in Canada. The news came hours after hours Ontario Health Minister Christine Elliott ordered public hospitals to report all cases of severe pulmonary disease tied to vaping.

“I am hearing from parents, educators and the health-care community that they share my concerns about youth vaping,” Petitpas Taylor said. “We cannot allow these products to threaten the hard-earned gains we’ve made in tobacco control. The proposed regulatory measures and our public awareness campaign will drive home the message: if you don’t smoke, don’t vape.”

Due to public attention on the issue, St. Joseph’s Hamilton respirologist Dr. Marcel Tunks said people who vape may be more aware of symptoms and more likely to seek treatment. Physicians will also be on the lookout for people presenting similar symptoms, he said.

“I’m sure there will be more (cases),” said Tunks.

Tunks said while vaping can help addicted smokers quit the habit, it’s by no means safe — we just don’t know how unsafe it is.

“It took a long time for people to realize how bad smoking was for our lungs. It’s probably going to be almost as long to understand the impact of vaping,” he said. “It could be decades.”

What Tunks does know is many e-juice flavouring agents and other vape-related chemicals haven’t been evaluated for safety. No one knows what they do to the lungs or if some people may be more prone to vape-related illness.

“The wrong chemical for the wrong person could make somebody very ill,” he said.

And with cannabis vapes, there is some thinking that oil deposited in the lungs could cause lipoid pneumonia, he said.

A recent Health Canada study showed 23 per cent of students in Grades 7 to 12 have tried an e-cigarette.

Some good news: Johnston said no students have been charged for vaping on school property in Hamilton. Under the Smoke-Free Ontario Act, use of an e-cigarette in a prohibited area can result in a $305 fine.

“That doesn’t mean they’re not doing it,” she said. “But I’m going to assume principals and school boards are dealing with it.”

Other regions rolling out the campaign include Niagara, Haldimand-Norfolk, Brant, Waterloo, Wellington, Dufferin and others.

—With files from The Canadian Press